I'm not being vitriolic, it's the name of the beer that I used for our new bread. You've seen it, it has a print of an angry gargoyle on its bottle wearing a scowl and two curled horns...

So, I was at the market the other day, and I watched this guy march over to the beer shelf and grab a few bottles of this Arrogant Bastard Ale. I was intrigued. He was so resolute, a knowing smile stretched across his face, as though he had fond memories of its company, had waited all week to acquaint himself with it again,  like an old friend. I ventured that it must be pretty damned good. I grabbed a couple myself. 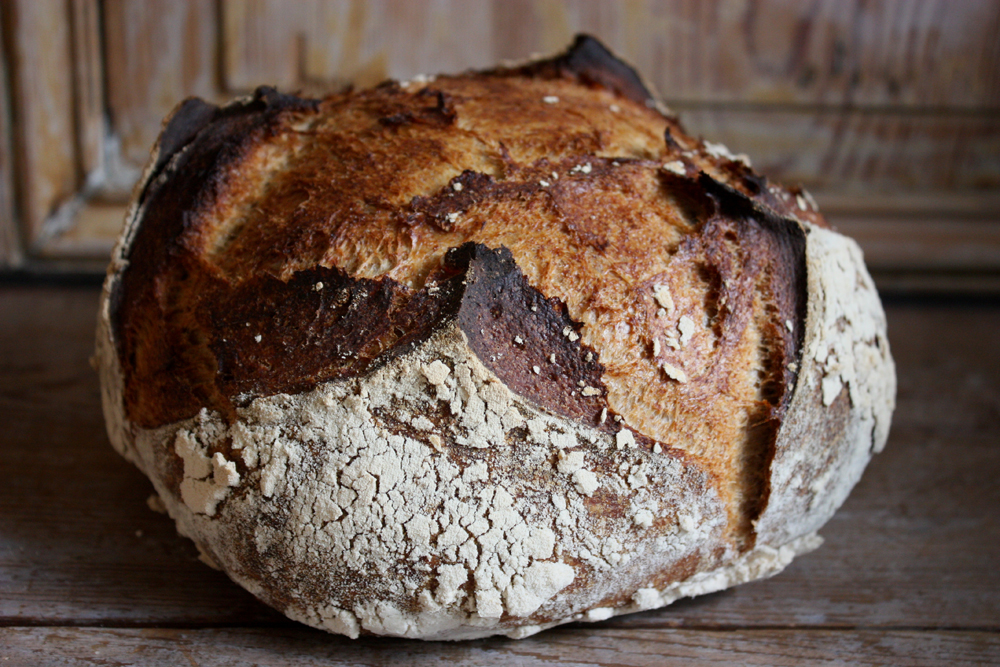 You know, I've been wanting to make a beer bread for a while now, but I didn't know how to go about it. Does the beer help the dough rise? Do you replace all of the water with beer? Will it be gross? Will I get drunk when I eat it? If so, how many slices will it take? Further,what type of beer does one use? 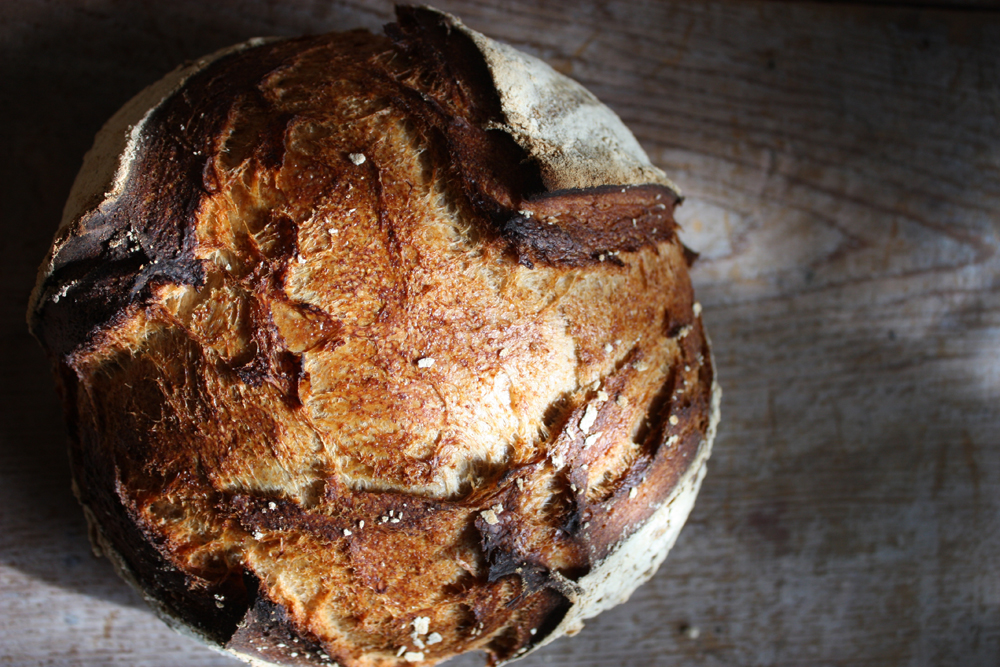 No buzz, but it is fabuleaux! And not for the faint of heart. As the bottle declares, this is an aggressive beer, and this aggression translates unto the baked loaf of bread. 'Liquid Arrogance', is how the company further describes its ale, and I would have to agree. The bread itself indeed tastes like the Arrogant Bastard that it is - definitively bitter, fruity, resolute. The notes of caramel echo in the tawny crumb. Powerful, yes, though it has its charms, perhaps that is its charm. It is absolutely beautiful with charcuterie and cheese (and the last of the beer from the bottle).

I used a 100% hydration, 100% organic dark rye starter for this bread, and equal measures of dark BRM rye and Arrogant Bastard for the levain. The just-mixed levain had a bitter-fruity aroma, and the next day it puffed up beautifully. I was a little afraid of how it would behave using beer in place of water, alas, my fear has been dispelled. 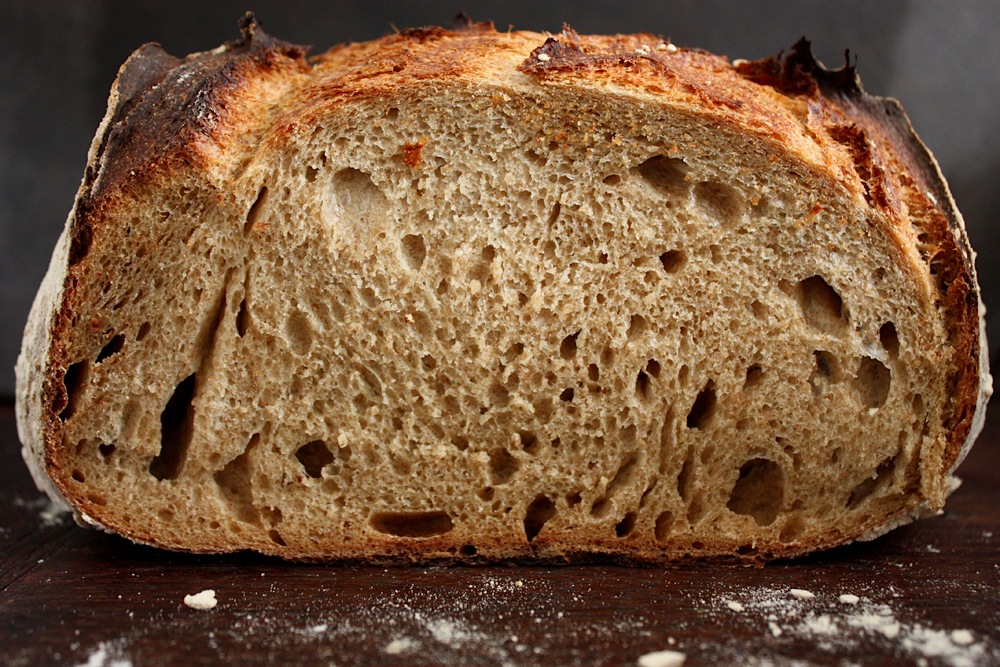 I did indeed decide to replace the total quantity of water with beer in the dough as well, and the result was an incredibly earth-shattering crust, and a moist and wholly fragrant crumb. Full gelatinization was realized with the 20-hour final proof, refrigerated, of course, and with 67% hydration (not incl. levain hydration; WITH levain quantities included, it weighs in at a 75.55% hydrated loaf), it achieved fabulous oven spring and pronounced ears. I was worried that it might break down with a long final ferment, but it did not. The crumb was light/chewy with no density at all. The dough was easy to work with as well, heady and unique. 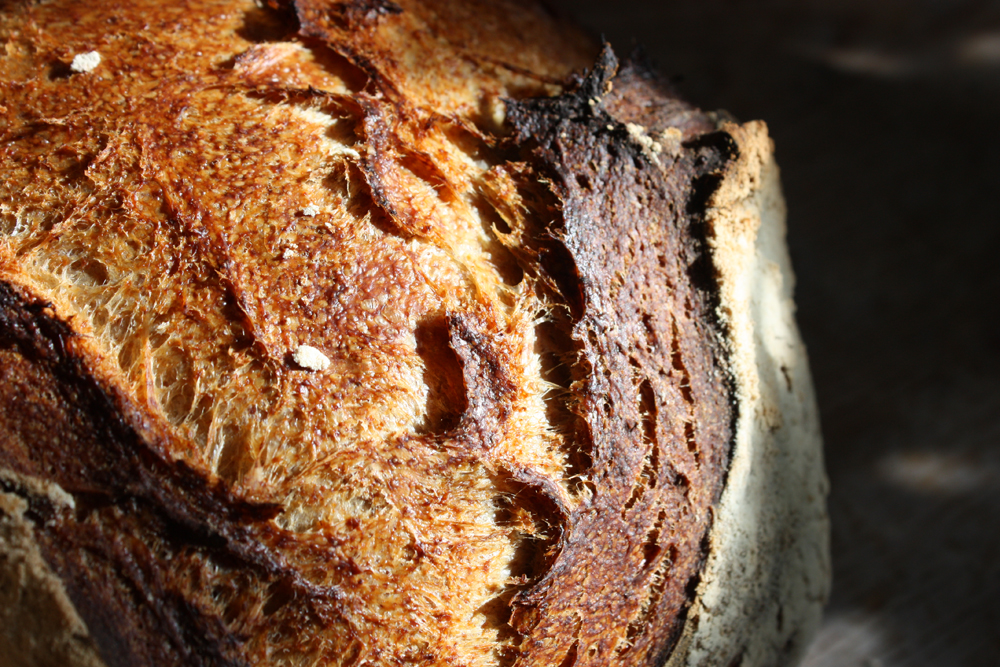 This formula is a keeper, and now that we know that the flavor profile of the beer that you use directly translates unto the bread, you can safely engineer a loaf that is more or less strong, more or less hoppy, by either experimenting with different beers (if you prefer, use one less arrogant), or using a ratio of water and beer to get the flavors exactly where you want them. Although, I'm pretty happy with the unique flavor and edginess of my bread using 100% Arrogant Bastard for the dough and I won't change this particular formula, I am jazzed to experiment with other beers to see what I can achieve. Of course, I will pass on my findings so that you can successfully bake your own without fear.

Here are the details of your arrogant bread. 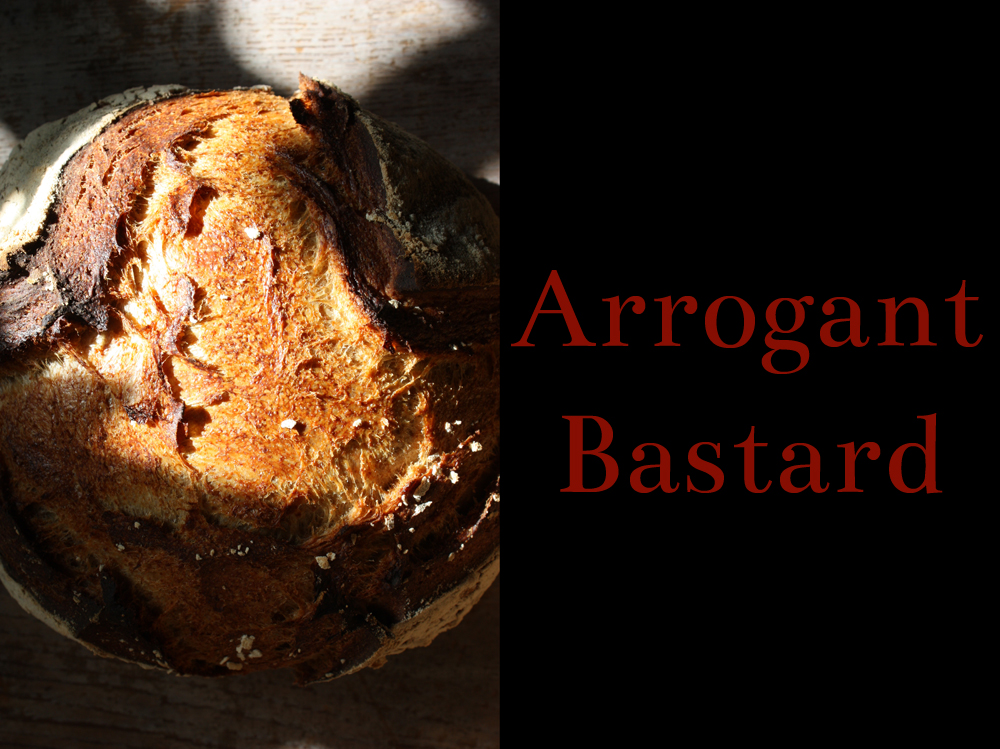 THE NIGHT BEFORE YOU PLAN TO MAKE THE DOUGH, prepare your levain:

Mix together the above into a smooth paste, and ferment overnight. Mine took 9 hours, and my house is pretty cool. 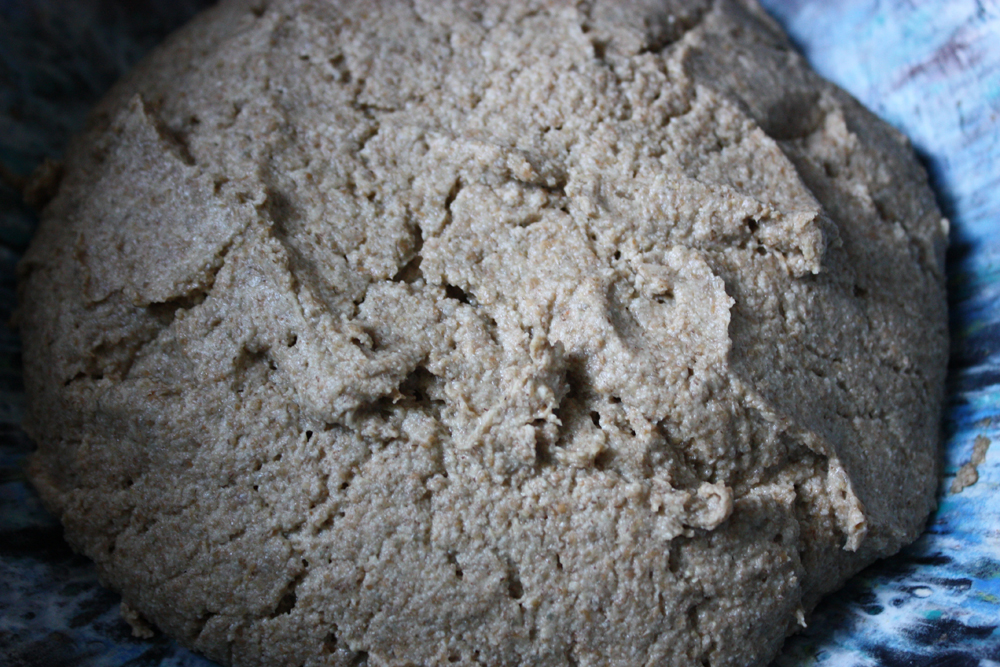 Dissolved the starter with the Bastard Ale, then mix in the flour until you reach a shaggy mass. Autolyse the dough for one full hour, and drink the remaining bit of beer. 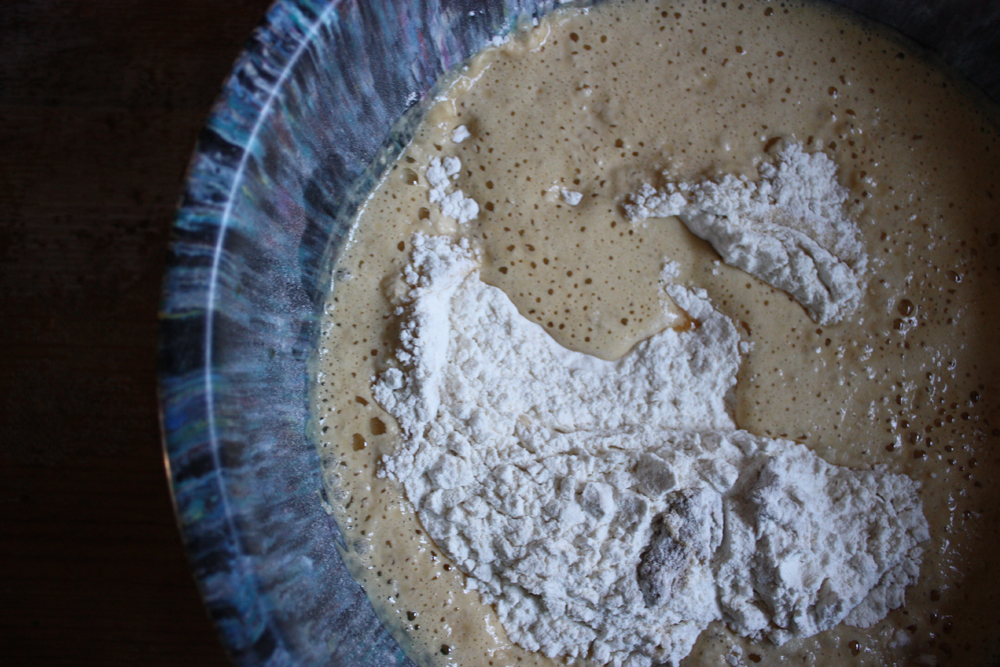 After the hour-long autolyse, squish the salt into the dough with your fingers until thoroughly incorporated. 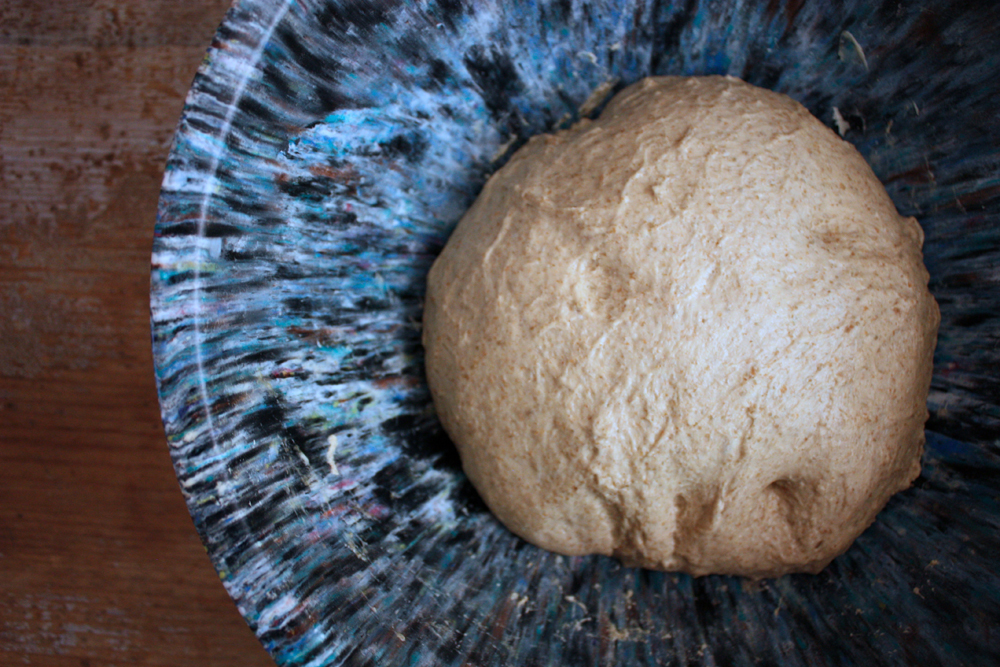 Time for the 4 hour bulk fermentation.

After the bulk fermentation is complete, turn the dough out onto a counter that has been dusted with brown rice flour and gather it together in a loose round. Cover with a bowl and rest for 10 minutes. 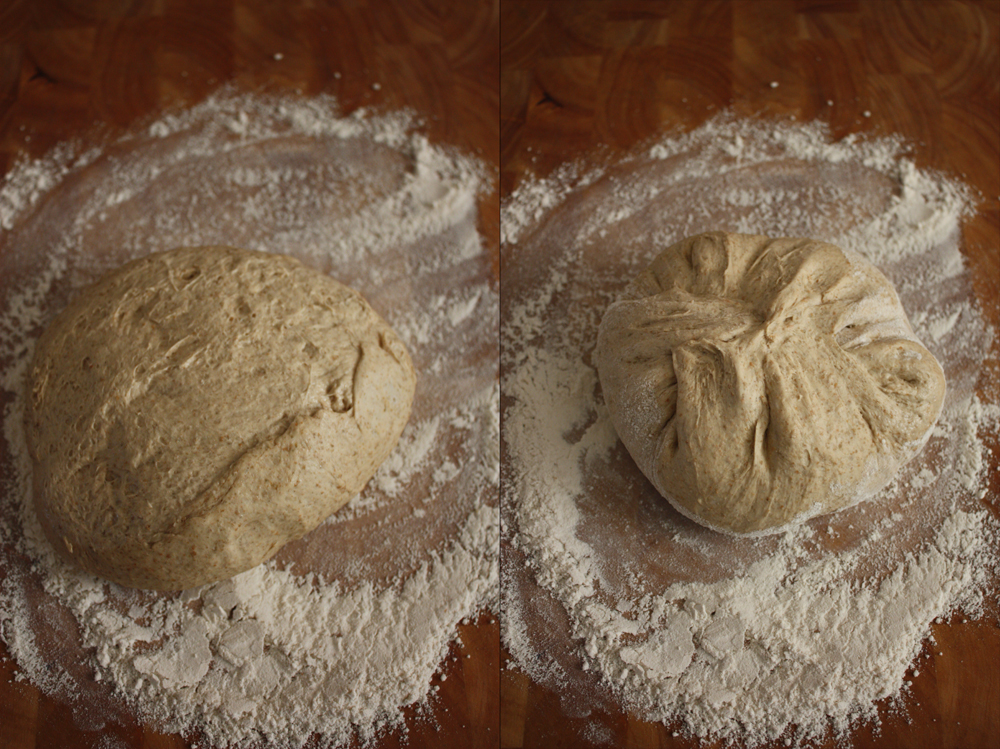 After the dough has rested, flip it over onto a clean part of the counter and twist into a boule (the clean counter will create friction against the dough and help you to make a tight boule. 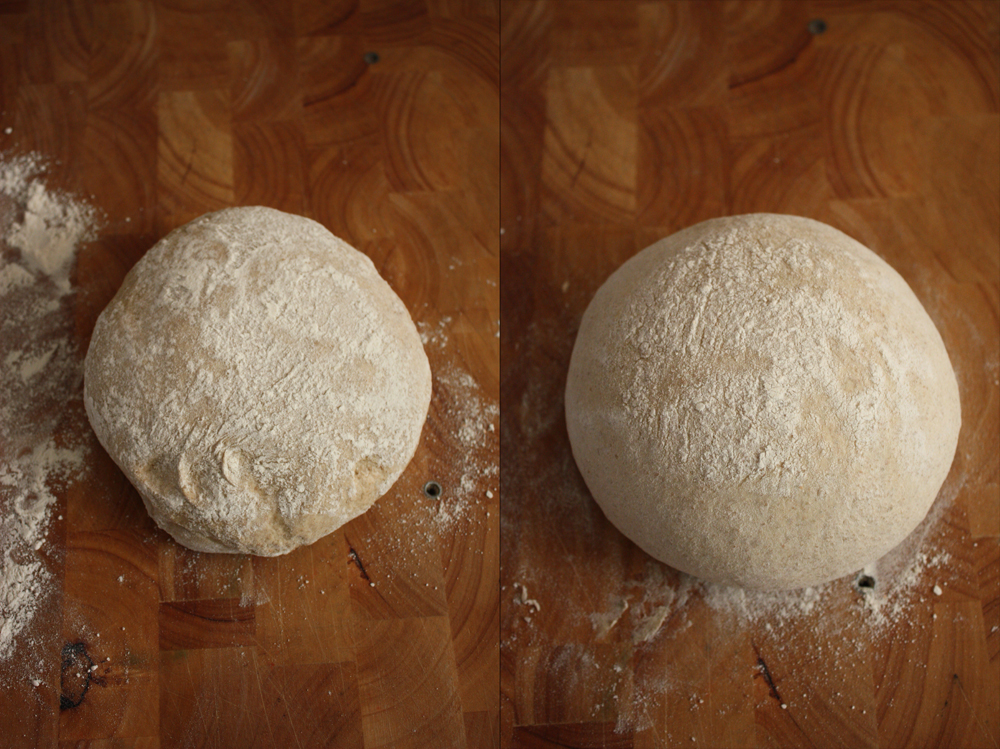 Pop the dough into a bowl that has been lined with linen and dusted liberally with brown rice flour. Pop this into the fridge, covered, of course, and ferment for 20 hours.

One hour before you plan to bake, preheat the oven to 550 degrees outfitted with both halves of your cast iron combo cooker and a baking stone. 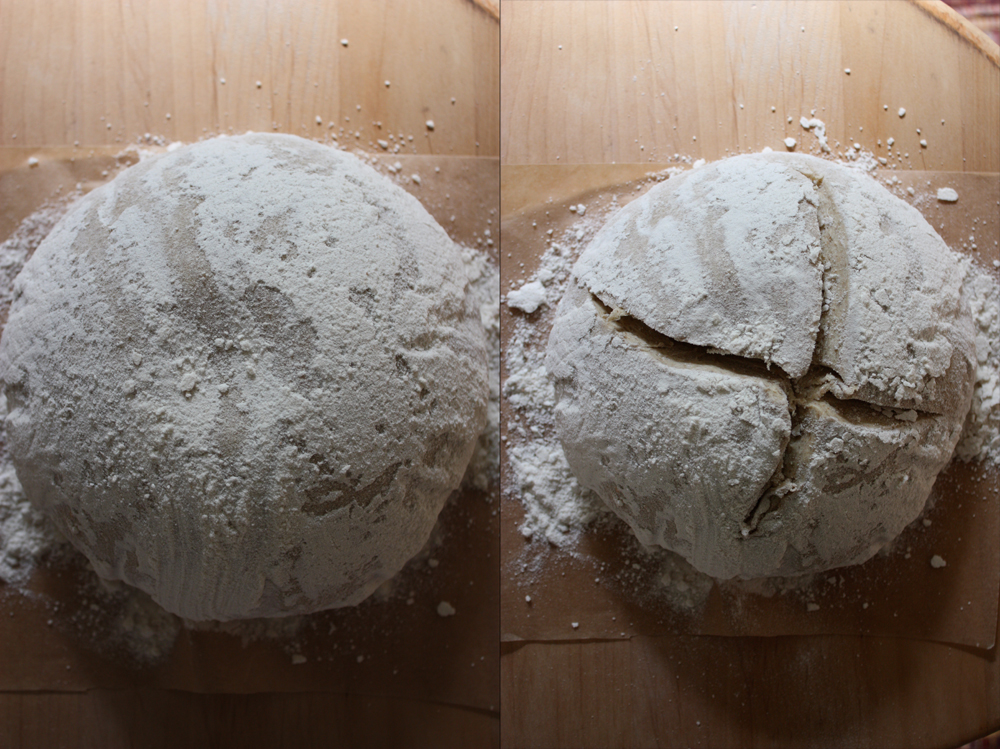 Slide it, parchment and all, into the shallow end of your awaiting combo cooker. Cover with the fat end. Turn the oven down to 475 degrees and steam for 30 minutes. 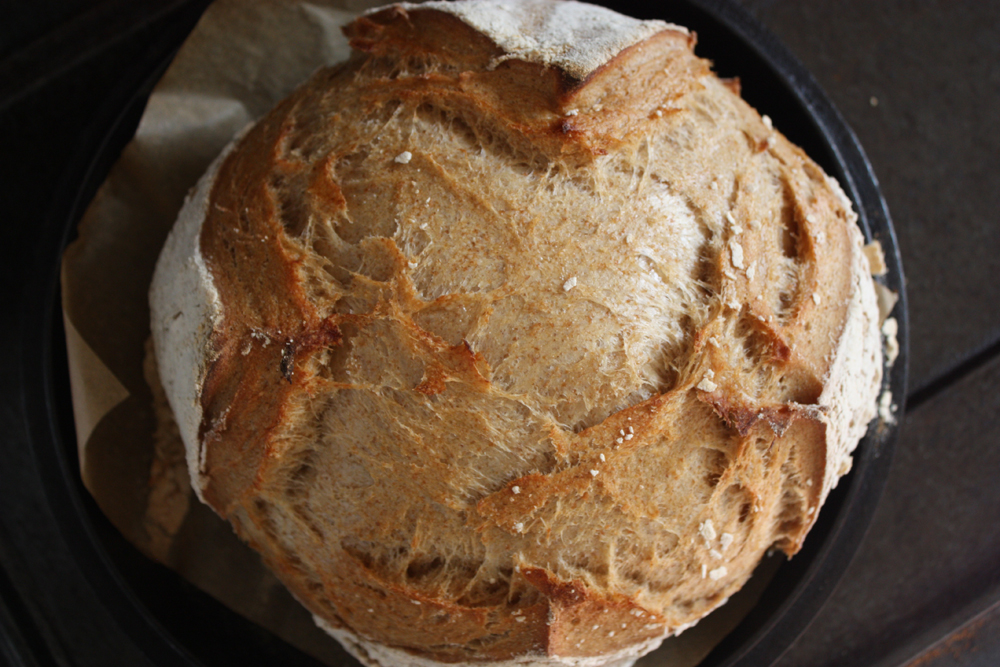 After the 30 minute steam, remove the fat end of the combo cooker wearing an oven mitt to avoid a nasty steam burn. Marvel at your perfectly steamed loaf. Slide it back into the oven, turn it down to 450 degrees and bake till chestnut brown, and not a moment before. No one wants a blonde loaf of bread, especially an arrogant bastard like this. 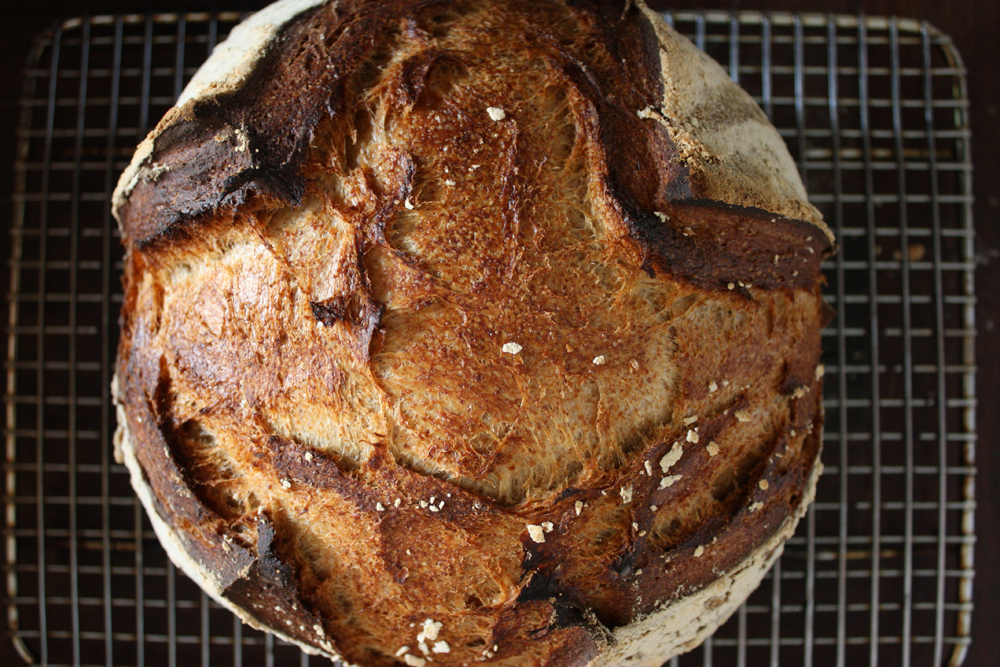 Wait a full hour and a half before slicing. And have with cheese and charcuterie.

This arrogant bastard has been sent off to Susan's Wild Yeast Blog to be admired in all its arrogant glory.


To the staff of life! 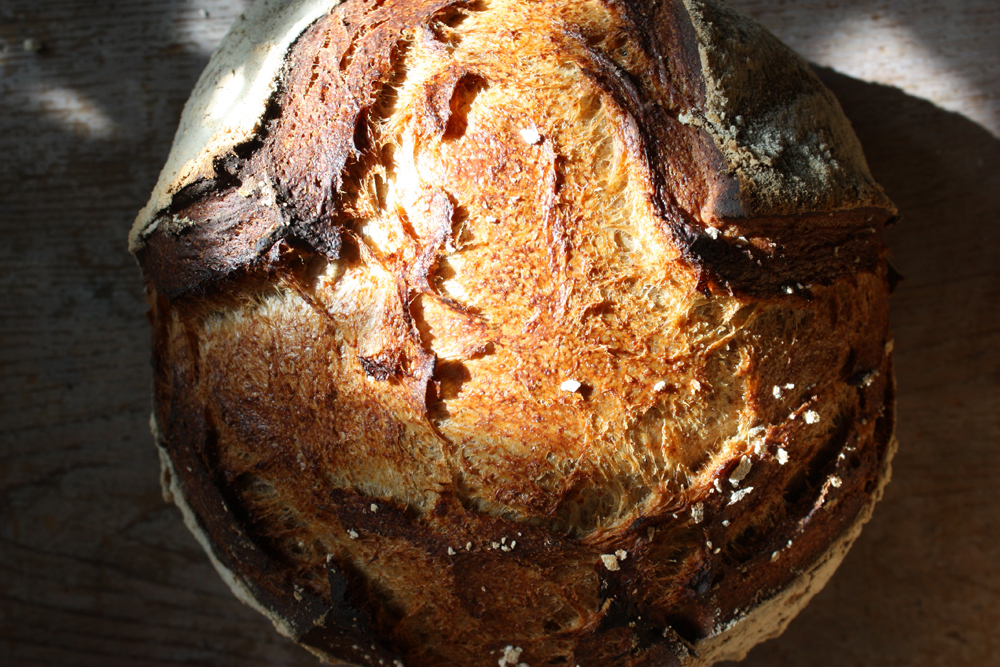 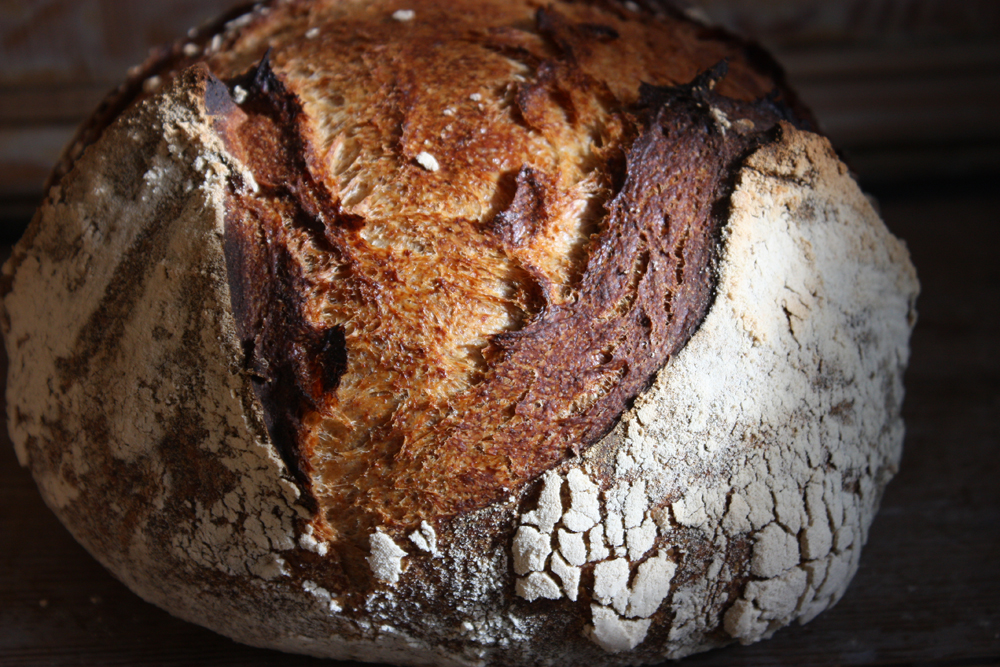 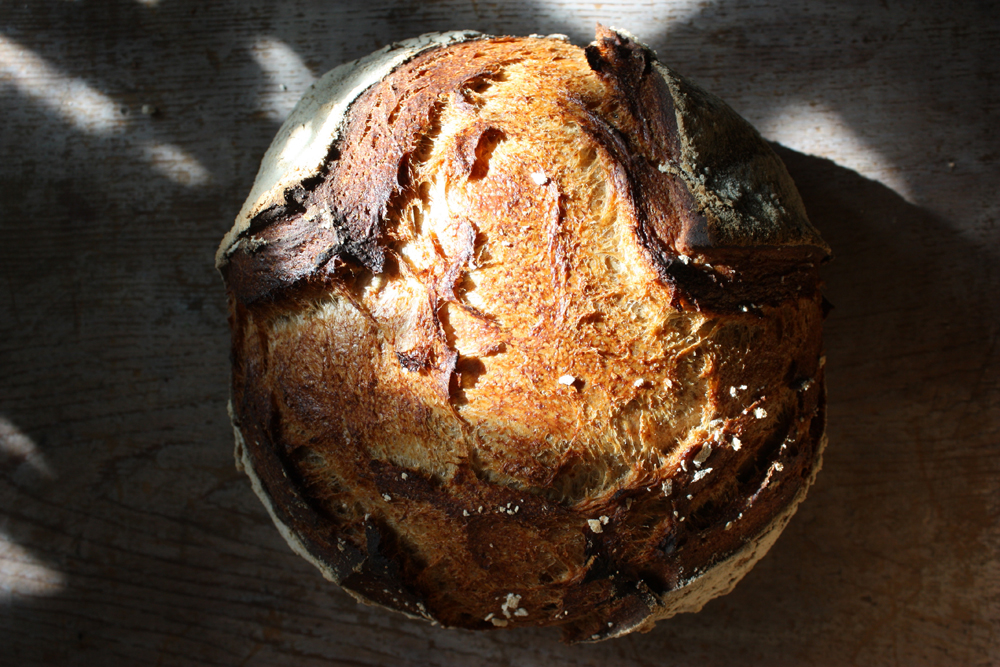 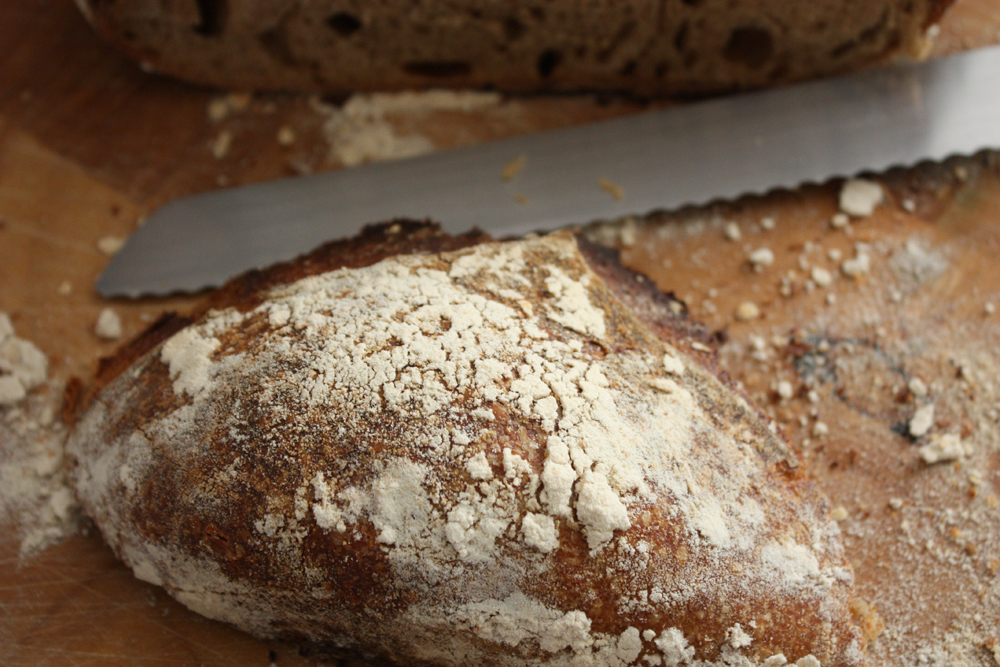 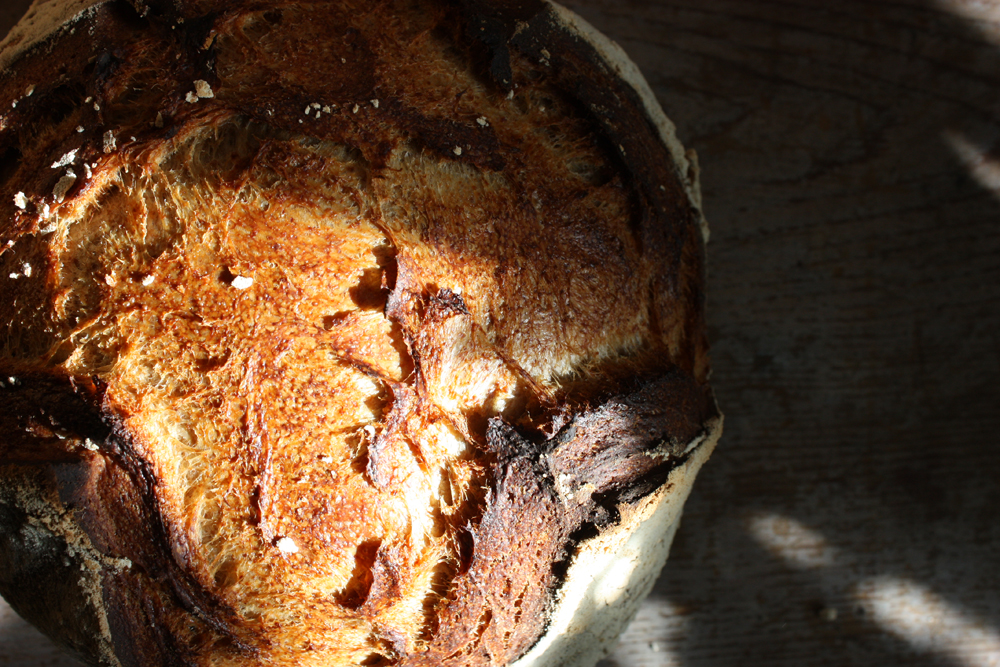 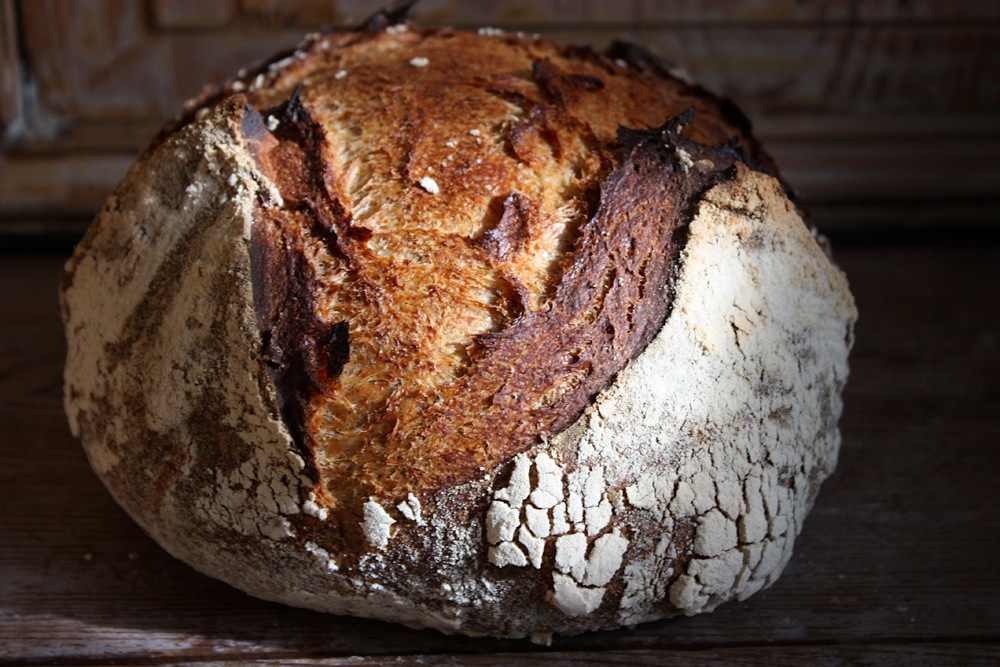 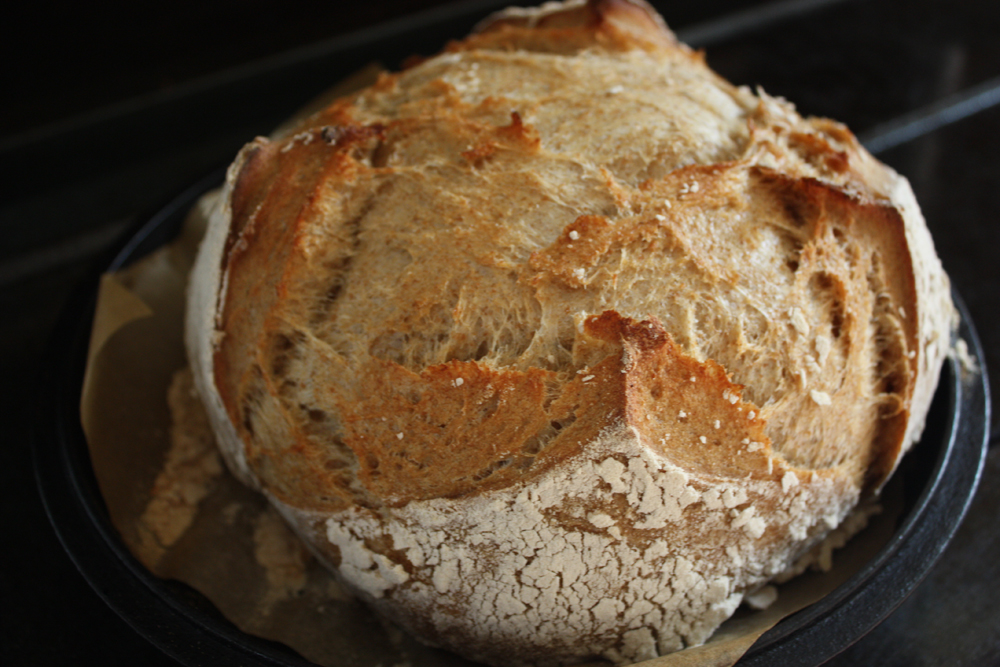